Depending on the amount of TV sets you will have on board you need to keep in mind that the satellite signal will need to be distributed to all the set top boxes/decoders. Smaller antenna models usually have a QUAD LNB with a maximum of 2 to 4 connections.  These can directly be connected to your satellite TV decoder or TV if it has a satellite decoder built in.

If you have more decoders or TVs than outputs on your satellite antenna then you will need an antenna with a QUATTRO LNB connected to a multiswitch. The multiswitches will then distribute the TV signal to all the locations on board the ship.

What is an LNB? 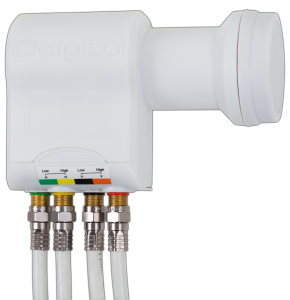 It is not able to downconvert all of these simultaneously – it needs to be sent commands from the satellite receiver that switch the output to the desired band/polarization. The satellite receiver switches to receive either High or Low Band with a 22Hz tone and either Horizontal or Vertical Polarization with a switching voltage between 12.5v – 18v. These tones and voltages are sent up the coaxial cable from the back of the receiver to the output of the LNB.

But what if you need more than one …

The quad version provides four outputs, each capable of providing each of the four frequency bands and polarizations. The outputs are switched by the satellite receiver, as explained above, with a 22Hz tone and a switching voltage. This is like a universal LNB with four outputs.

In a simple residential satellite TV installation it is normal to install a quad LNB. In a Sky installation, often two of the outputs from a quad will be used to feed a Sky+ receiver (it has two feeds so you can record while watching live TV), with either the other two feeding a second Sky+ receiver or just a single output feeding a regular Sky box.

A quad is ideal where a maximum of four satellite feeds is required and there is not much possibility of expansion.

A quattro is normally used to feed a large distribution system. A single dish with a quattro fitted and a multiswitch is able to feed anything between 4 and 100 locations. The multiswitch is able to provide any of the input signals at each output, depending on a tone/voltage sent up the cable by the receiver at each location. It’s as though the receiver at each location has it’s own dedicated LNB. 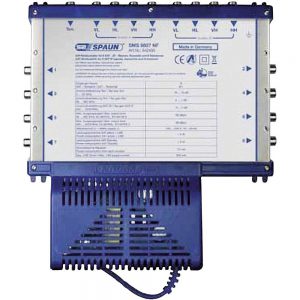 The outputs on a multiswitch are able to be controlled with a 22KHz tone and switching voltages in the same way that the outputs from normal universal LNB can be, i.e. to change band and polarisation. The satellite receivers in each of the locations behave as though they are connected to their own dedicated dish and LNB, but in reality are just connected to a multiswitch output.  Quattros are considered to have a better lifetime than quads as they are not being continually switched.

Although a quattro LNB typically looks similar to a quad LNB, it cannot (sensibly) be connected to receivers directly. Note again the difference between a quad and a quattro LNB: A quad LNB can drive four tuners directly, with each output providing signals from the entire Ku band. A quattro LNB is for connection to a multiswitch in a shared dish distribution system and each output provides only a quarter of the Ku band signals.

If your ship requires a large amount of TVs then you will require a DVB-C or IP Head-End solution to distribute the TV signal to all the TVs. Head End solutions become valuable when distributing paid content (subscrption channels, Sports, Movies) which will in a regular scenario require a subscription for each individual TV